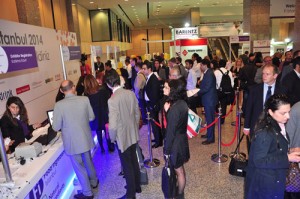 Food ingredients (Fi) Istanbul once again brought the biggest food manufacturers in the world together in Istanbul; this year’s highlights were the reformulations, innovative products, natural and organic solutions that shaped the future of food. The event, that took place at Lutfi Kirdar Congress and Exhibition Centre between April 24 and 26, announced that obesity and overweight rates in Turkey reached 17.3% and 37.8% respectively. It was also pointed out that the food market for natural ingredients will reach TL 19 billion by 2018.
The international Food Ingredients, Solutions and Additives Fair, Food Ingredients (Fi) Istanbul, opened by Kasim PIRAL, Istanbul Food, Agriculture and Livestock Director, brought the global food industry together again in Istanbul before being closed on April 26. The event held at Lutfi Kirdar Congress and Exhibition Centre drew significant attention. Kemal UNAKITAN, former Minister of Economy, was among the visitors. This second event in Istanbul managed to be the FIRST and ONLY food ingredients, solutions and additives show and conference in the region with 130 exhibitors, from 21 countries and more than 3,000 visitors. A massive 84% of the exhibitors have already confirmed for Fi Istanbul 2015, providing further proof of the show’s necessity within the industry.
OBESITY ON THE RISE IN TURKEY
Kerim Alain BERTRAND, Country Manager, UBM Turkey, stated that the Turkish market is presenting a significant opportunity for food and beverage manufacturers and suppliers thanks to the health initiatives of the government and increasing consumer interest towards healthy and innovative products. BERTRAND also stated that a new study conducted among Turkish citizens older than 15 years revealed that 17.3% of the Turkish population was obese and 37.8% is overweight, and added: “The Euromonitor International report reveals the fact that the Turkish population is facing the obesity risk.”
THE MARKET IS EXPECTED TO REACH TL 19 BILLION
Kerim Alain BERTRAND also stated that the latest innovations in the TL 13 Billion healthy food market in Turkey were showcased during Food ingredients (Fi) Istanbul, the most prestigious meeting point of the food industry that brings regional and international manufacturers together. BERTRAND stated that the market is expected to reach a sales volume of TL 19 Billion by 2018 according to Euromonitor International’s report.
Fi ISTANBUL GREW BY 40
Kerim Alain BERTRAND, Country Manager, UBM Turkey, also said that the International Food Ingredients, Solutions and Additives Show Food ingredients (Fi) saw a 40% increase in the number of visitors this year. BERTRAND reminded that 130 exhibitors from 21 countries including Germany, USA, Belgium, UAE, China, Denmark, India, England, Switzerland, Sri Lanka and Togo participated in the show, and that the Food ingredients (Fi) Istanbul Show and Conference, which was supported by prestigious Turkish NGOs like the Association of Food Additives and Ingredients (GIDAKAT) and Turkish Food Safety Association (GGD) was visited by more than 3,000 local and international visitors from Turkey, the Balkans, Middle East, Central Asia and North Africa.
FORMER MINISTER OF ECONOMY, KEMAL UNAKITAN VISITED Fi ISTANBUL
Kemal UNAKITAN, former Minister of Economy, was among the visitors of Fi Istanbul. After a tour of the show, UNAKITAN said: Fi Istanbul is the show that best reflects the potential of the food market in Turkey. We are promoting Turkish products. We have both visitors and exhibitors from abroad. The world is a global village now.” UNAKITAN also reminded that they used to see such shows only in other countries, and added: “But now we organize the best of the best here in Turkey; these shows contribute to the country’s economy.”

Summer Fancy Food Show Will Be Largest Ever

Focus on water and water management at drinktec

ISM 2023 with new date: World’s largest trade fair for confectionery and snacks to be held once only from April 23 to 25

Summer Fancy Food Show Will Be Largest Ever

Banvit İnforms Dieticians About Healthy and Dependable Production of Chicken