Ramar proves Filipino food is no longer the shy cuisine of its immigrant roots at booth #3903
If Filipino food were a female actress, it would be “America’s Sweetheart.” This ‘shy’ cuisine used to be sold exclusively in Asian grocery stores and “mom-and-pop” delis in ‘Little Manila.’ Today, Philippine cuisine is breaking out into mainstream with press critical acclaim, from the Wall Street Journal to BuzzFeed. Kusina made by Ramar Foods is the first line of prepared Filipino entrees available to a mainstream American audience.
The Kusina (“kitchen” in Filipino) product line represents the most popular dishes in a Filipino-American’s home, prepared and ready to serve. Kusina is a gateway experience for Filipino flavor. Such as Kusina’s Chicken Adobo, the official national dish of the Philippines.
Adobo blends vinegar and garlic with hints of soy sauce and black pepper to create a tangy marinade and delicious broth perfect for rice.
Kusina offers an easy way to enjoy a Filipino meal in the comfort of your own kusina. 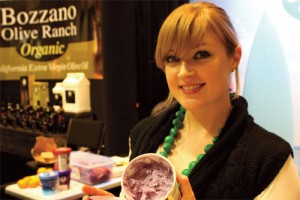 Philippine cuisine is a melting pot of influences that trace back over 400 years when Spanish settlers immersed their recipes with the finest of native Filipino, Chinese, Japanese, Indian, Thai, and Malay cooking.
Ramar launched their first trial run of Philippine cuisine for non-ethnic market with Kusina in 2012 at the Winter Fancy Food Show in San Francisco.
The taste responses by attendees was an overwhelming “Yes!” Even during a major food industry tradeshow with 1000’s of tasting options, attendees came back daily to have Kusina for lunch.
People of all backgrounds thought that Filipino food such as chicken adobo, vegetable lumpia, and pancit were delicious, and voice the question, “Why haven’t I tried Filipino food earlier?”

A Dependable Supplier of Cornflakes and Cereals: Mepal Food