Ozcanlar on the way to Europe

When it comes to meatball Tekirdag comes to mind first in Turkey a country full of local specialties.
Deep-rooted tradition of this food was repeated in a small restaurant by Ismail and Arif Ozcan brothers 61 years ago when the foundation of Ozcanlar Kofte was laid. Now, the brand is on the door to Europe, having 7 restaurants and 2 meat markets in Istanbul and Tekirdag. General Manager Mestan Ozcan informed about his vision to step in European markets.
On his aim to enter in European markets
Serious demand comes especially from Germany. Doner (rotating kebab) market has expanded enormously in Europe and it has become a growth industry. Kofte, meatball may be the new segment. Offers are coming for business partnership, because we have valuable expertise in meatball business. We visit Anuga fair annually. Recently, a friend of family, one of the largest distributors of doner, fruits and vegetables in Germany, offered us to establish a production facility and distribution network for meatball. We are working on this project. We want to sell kofte in Europe, as well.
“Unchanging name Tekirdag Meatballs” from 61 years
In the 1950s, small restaurants made mincemeat with the local technical and the reputation spread all over the country. After the name of the city literally begins to be called with the meatball. The Periods of story Tekirdağ meatball began in 1953 and stepped into the sector from family with its two masters, the brothers’ İsmail and Özcan provided significant contributions to this fame. The two brothers founded the Özcanlar meatball prepared with be happiness and taking care of the meatballs regains a justified reputation in a short time with. Especially all the repeated guest from out of town insist to open a branch despite patrons are never thought for a long time to open a branch. Because Priority will always protect the family standard and flavor of the second generation, while maintaining the same watchword Özcanlar can do. They create a business plan when the producing increases not to demand will grow. Each step of large capacity extension with the family approval and after the creation of the infrastructure in İstanbul in 2007, Astoria opened restaurant with 150 seats than they meet with the Özcanlar Meatball loyalists then, with a covered area of over 1000 sqm maxi branch’s new buildings, moved to the Coast of Tekirdağ Port Branch opens. In 2010, the 500-person enters service in Beyazköy branch of Tekirdağ. 2012 September İstanbul Sky port features 6. The restaurant is inspired by the style of Seljuk architecture in April 2013; 1.200 sqm off, 1.200 sqm open spaces, magnificent garden and terrace restaurant at Çorlu enters into service. Özcanlar Meatballs after 61 years, It becomes the greatest economic assets of Tekirdağ with a total of 2,200 people capacity 7 restaurants, 2 meat market, a 2.000 sqm area of the meat processing center, 1500 acre of land with consist over 500 big cattle and 500 small cattle farms and 350 employees. Özcanlar produced the Tekirdağ meatballs put inside veal, onion, garlic, bread, salt, cumin, black pepper, except any article with it protects the flavor recipe that does not change over the years. Does anyone know meatball taste who loyal Özcanlar meatball, it prepared for the seven raw materials only within these meatballs Tekirdağ holds Özcanlar famous meatballs only produces real flesh. No preservatives, additives; does not contain soy or mechanical mincing. In 1953, how they do so is today producing the production of Özcanlar; Trakya in the flesh, Tekirdağ-style preparation and ingenious grid components in the iconic flavor palate with 61 years experiencing its protecting as a secret. While 61 years ago prepared 50 kilos per day but today Özcanlar meatball prepared 1 ton with the same method.In 2007, the Astoria has opened 1April 2014 Özcanlar meatball restaurant meet with its loyal guest from the date of the renewed concept of the street food in traditional Trakya delights the palate and continues to appeal to the eye. Here you will taste with wonderful flavor of Özcanlar meatballs a few traditional recipes to…
Tekirdag Meatball
Özcanlar produce forgoes their own farm land with also fed 100 percent indigenous cattle and they are all truncation with Islamic principles of meat, bone and nerve in a process long and laborious extracting from. The resulting meats are being turned into a meat grinder. Then a small amount of bread, onion and garlic mixing together. Attracted to this dough rest for 24 hours in cold room. Into the dough meat loaf then cumin, pepper and salt and process of forming clumps then roll again become ready. Then giving specific cylinders to form Terra cotta and Tekirdağ meatballs ready to cook. Served with tomato, peppers and onions.
Hayrabolu Dessert 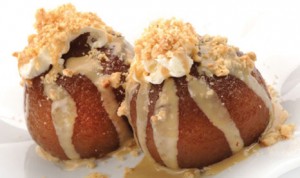 Reaching the magnificent flavor to the table from Tekirdağ Hayrabolu… Housewife in Tekirdağ served it in their guest every time. Hayrabolu becomes as local flavor to the table when Özcanlar add to their menu. Produced from fresh milk received on a daily basis and interested in cheese without salt; semolina, flour, salt and milk by adding Hayrabolu pulp and then mixing together. Hayrabolu sweet difference than the similar sweet unlike consisted for 60% of cheese. After Dough forming it ready to put the trays and cooking. While the dessert is waiting in trays, is being boiled sugar and dropping with the cooked desserts. When the Desserts are cooling served with sesame oil and with nuts.
Cheese Helva
Produced from fresh milk received on a daily basis and unsalted cheese, melted with constant stirring high heat. The melted cheese when it comes to desired consistency; continuing the process of attending and butter mixture. Mastery requires that at the end of a long and laborious process of mixing, kneading, and rolling to the consistency of cheese helva. After resting for a short Sura with saffron color plasticity process continues until the consistency of service. Finally, resting back after on packaging. Optionally served with ice cream.