Held for the 8th time, Future Fish Eurasia Fair hosted 158 exhibitors from 24 countries, among them were USA, Germany, Norway, France, Italy, Israel, Spain, England, Japan and Vietnam.
Leading companies, exporters and farmers exhibited their aqua products,feeds, machinery, systems, equipment,chemicals and medicines. STG, promotional committee for aqua products,was the star of the event withits booth that was visited by M. Altug Atalay, general director of fishery andaqua products section, Aziz Kocaoglu, metropolitan mayor of Izmir, and Sinan Kiziltan, chairman of the Aegean Association of aqua and animal products exporters.
By emphasizing on the position of aqua products industry in Turkey, Sinan Kiziltan said, “The industry exports to 80 countries and has anannual revenue of 800 million dollar in 2015. It was only 52 million dollars in 2000. Norway earns 5.5 billion dollars annually from fishery exports. We target to reach the level of billion dollars.
We were one of the most attractive booth in the Future Fish Eurasia Fairheld in Brussels.”He also added, “We are happy about the results of compensatory tax investigation proceeded since 2015 on seabrams and sea basses exports that was decided in favor of us.”Future Fish Eurasia 2016 Fair was held jointly and simultaneously with MiddleEast & Central Asia Aquaculture fair in Izmir. 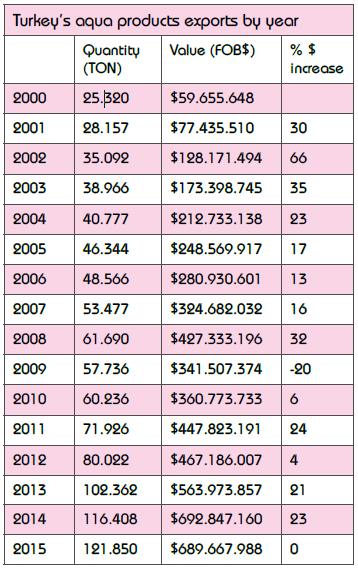 WorldFood Istanbul 2016 to shed light on the future of the food industry...