If food packaging or drug packaging is not properly sealed when the customer buys the product, it reflects poorly on the manufacturer. In the future, a thin- film temperature sensor will allow companies to carry out fast and reliable inline detection and rejection of packaging which has been incorrectly sealed.
“Three gummy bears, a licorice twist, and two lollipops please.” That was how children used to spend their pocket money at the candy store. Today’s children buy their treats prepackaged at the supermarket. And it isn’t just candy that comes in this form: every year, factories worldwide turn out something like a trillion units of film packaging for food, cosmetic, pharmaceutical and consumer technology products. Ninety percent of this packaging is manufactured using thermal contact processes, in other words sealed with the aid of hot tools. During these processes, the packaged goods can sometimes get into the seam and prevent it from sealing properly. Currently, manufacturers generally have to rely on spot checks to catch these packaging faults. If incorrectly sealed food or medical product packaging ends up on supermarket or pharmacy shelves, it can impair the product quality or shorten its shelf life – to say nothing of harming the manufacturer’s reputation.
Thin-film sensors for inline monitoring of the packaging process
Researchers at the Fraunhofer Institutes for Mechanics of Materials IWM in Freiburg and for Process Engineering and Packaging IVV in Dresden have developed a method that will enable manufacturers to significantly reduce the 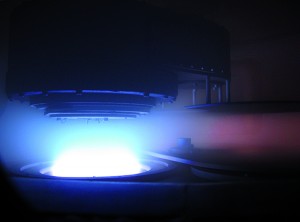 amount of incorrectly sealed packaging, if not prevent it altogether: a thin-film temperature sensor integrated directly into the sealing bar, which permits inline monitoring of the packaging process. “Instead of simply relying on spot checks, manufacturers can now inspect every single item of packaging,” confirms Alexander Fromm, project manager in the Functional Coating Materials group at the Fraunhofer IWM. “This gives them far greater assurance that all food and drug packaging is tightly sealed. In addition, it removes the need for time-consuming downstream testing.”
Take candy packaging as an example. The current method is to have two heated sealing bars clamp a film tube and partially melt the plastic composite, sealing the packaging. Once the candy is poured in, the tube is then clamped by the tools at the designated places and heat-sealed in the same manner. Finally, a blade separates it from the next unit. How well the seam holds depends above all on the temperature of the sealing bar surface: if it is too hot, the film burns; if it is too cold, the film sections are not fused tightly enough together. The result is the same in both cases: the package is not sealed properly. It is hardly surprising that manufacturers go to great lengths to detect such faults. For example, some spot checks are performed by placing the packaging in a water bath, and air bubbles rising to the surface indicate leaks.

An end to spot checks
There is, however, an alternative.. “Because we apply the temperature sensors directly to the sealing bar, we receive direct information about every single packaging unit for each sealing process,” explains Gregor Wendt, scientist at Fraunhofer IVV in Dresden. If the temperature is too high or too low, it can be adjusted immediately at the machine – before large numbers of incorrectly sealed units of packaging start flowing off the line. The inline quality inspection method also reliably recognizes products that have become wedged in the packaging, such as a piece of candy that has slipped into the seam. This works as follows: when sealing bars seal films together, the films absorb some of the bars’ heat. Accordingly, the bars cool down a little. How far the tempera- ture drops depends on the mass of the object wedged in the packaging. If a piece of candy has strayed into the sealing zone, it also absorbs some of the heat – the bars cool down faster than without wedged goods. 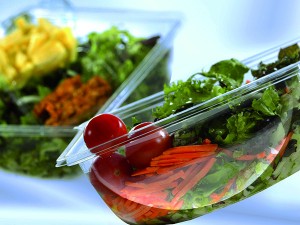 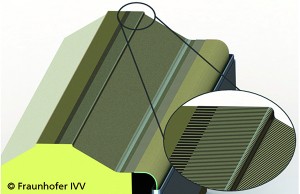 The highly sensitive system is even capable of detecting coffee powder in the seam – and of doing so faster and more accurately than the sensors that have been used in sealing processes up to now. For the sensor itself, the coating specialists use thermo- couples manufactured in established thin-film processes. They vapor-deposit the various materials of the thermocouple in a vacuum directly onto the sealing bar. With a layer just a few hundred nanometers thick, the resulting sensor is extremely thin and has a very short response time. At Fraunhofer IWM, researchers are developing adapted protective coatings for specific industrial applications. Meanwhile, their colleagues at Fraunhofer IVV in Dresden are integrating sensor-fitted sealing bars into packaging systems and handling the ways in which sensors make contact. In tests on a laboratory sealing unit, the research team has already been able to verify that the sealing process with an integrated thin-film sensor functions properly. In further steps, the scientists are currently working on solutions to adapt this technology to the tools generally used in industrial manufacturing including the high number of cycles and wide variety of film materials this entails.
“Thanks to our technology, companies can be virtually certain that each and every unit of film packaging is properly sealed– whether it contains food, drugs, or cosmetics. As a result, the probability of a packaged item not being correctly sealed is reduced significantly, said Alexander Fromm, Fraunhofer IW.