The sugar and chocolate confectionery sector in Turkey is historically based on the production of traditional Turkish confectionery products such as Turkish delight and halva. The gum sector is another dynamic area within confectionery. The Turkish gum market is very competitive thanks to presence of powerful local and multinational companies, which have been operating for a long time in the market. Production of sweet gum, sugar-free gum, functional gum and bubble gum has steadily increased since 2000.
Turkey has the advantage of being self-sufficient in sugar which is one of the main confectionery ingredients. Turkey is also in a very advantageous situation thanks to its dominance in the world production of dried fruits (dried apricots, raisins, dried figs) and edible nuts (hazelnuts, pistachios). The hazelnut, in particular, is now one of the basic ingredients widely used in the confectionery sector. Hazelnut flour, roasted and sliced hazelnuts are used in the production of sweets, cakes and biscuits. Hazelnut paste is used in the production of chocolate. The special products supplied for direct consumption are hazelnut puree, halva and hazelnut cream.
Turkish pistachios, are also used in the production of Turkish delight, halva and chocolate, and Turkish sultanas (raisins), as well as used in the production of certain cakes, biscuits, and confectionery products. The advantage of being a producer and supplier of various agricultural products combined with high technology, has increased the product variety in the industry. Apricots and dried apricots have been used in the production of newly developed confectionery products such as apricot bars, delight and paste in recent years.
Turkey is not only in an advantageous situation with respect to the ingredients used in the confectionery sector but also provides good opportunity for its confectionery producers and exporters, with its increasing potential in the overall size of the market, an increasing young population, proximity to import markets, and a strong potential for growth in tourism.
Production trends of confectionery products are closely related to domestic and foreign demand. The production capacity is well over the domestic demand, and as a result, most middle and large-sized companies export their products.
Production of Turkish delight and halva dates back to ancient times. Turkish delight, as the name indicates, is a product originating in Turkey. Sugar, glucose and cornstarch are the raw materials used in its production. Halva is consumed throughout the year by consumers. It is cheaper than many other sweets and, in addition, it is very delicious and nutritious. The ingredients used in its production are flour, semolina and sugar. Honey or grape molasses can also be used in some varieties of halva instead of sugar.
Changing lifestyles and increasing health consciousness among consumers are notable trends affecting the sector. Consumers are demanding more innovative products. Therefore, new products are introduced regularly to the Turkish confectionery market.
The sector has become one of the most important subsectors of the food industry using modern technology together with the traditional production methods. The Turkish sugar and chocolate confectionery sector has the most advanced technology in the Middle East, Balkans, North Africa, Baltics and Central Asia. Turkish products are more widely diversified and of a higher quality.
Quality is one issue that Turkish exporters give priority to. As a result of integration with the European Union (EU), Turkish food laws are being harmonized with the relevant EU Directives, ensuring that all consumers have access to safe products. In addition, Turkey is actively taking part in the Food and Agriculture Organization / World Health Organization Codex Alimentarius Commission in the establishment of international standards. Many firms are applying quality systems like HACCP or ISO 9000 standards and trying to satisfy further demands of their customers.
EXPORTS
Turkey is a net exporter of confectionery products. The export value of sugar and chocolate confectionery reached at 1,7 billion US dollars in 2016, which constituted 1.19% of Turkey’s total export revenue (US$ 142 billion), nearly the same proportion as the previous year.
Exports of sugar and chocolate confectionery increased steadily between 2009 and 2016, and reached 719 thousand tons. This remarkably high increase in export quantity has undoubtedly been achieved thanks to the recent modernization and technological improvements realized in the sector.
The Turkish confectionery producers and exporters are highly equipped to meet international standards and consumer preferences.
Iraq was the leading importer country taking over 25% of total exports of sugar confectionery in 2016. It was followed by USA (6,1%) and Saudi Arabia (5,9%).
The other major export items were chewing gum, Turkish delight, halva, toffees and caramels in 2016. 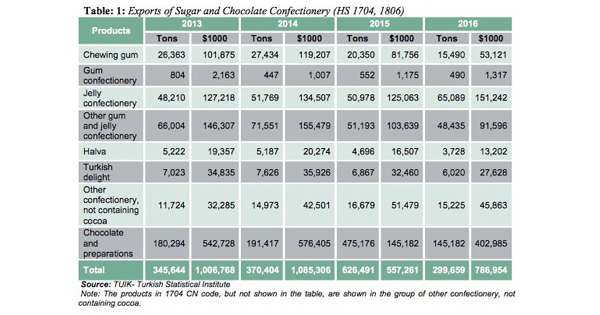 The total export value of chocolate confectionery was 402 million US dollars in 2016. The main importer countries are Iraq, the USA and Libya. 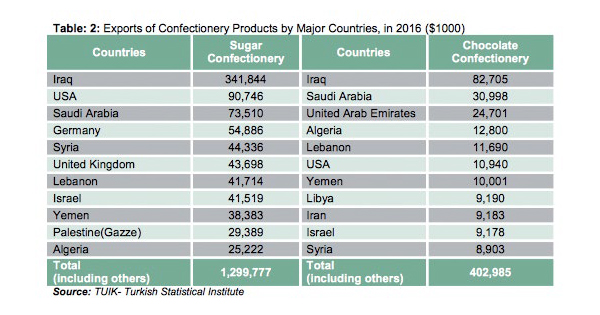 Quality by name crunchy in taste...