The fertile Anatolian geography is home to one of the world’s largest salt lakes. Situated right in the center of Turkey, quality salt production has been carried out for hundreds of years in the Salt Lake in Konya and met the needs of the region.


Koyuncu Salt company is the largest salt producer in Turkey with its modern manufacturing and R&D facilities located in the Salt Lake. It is one of the world’s leading salt producers. In addition to natural raw salt, the company focuses on innovative products and produces a wide range of products from industrial salt to liquid salt. An average of 1.5 million tons of raw salt is produced annually by solar evaporation process and an average of 300 thousand tons of processed salt is produced annually in the processing plant. Half of the salt exports from Turkey is realized by Koyuncu Salt company alone. Salt is exported to more than 50 countries in 5 continents. The main export markets are USA, Russia, Central America, Europe, Middle East and Africa.
Sustainable Technological Production
Pointing out that Salt Lake is a first degree natural and environmental protection zone, Omer Cetiner, General Manager of Koyuncu Salt, said that they realized sustainable production using the latest technology. Cetiner stated that Salt Lake is fed only by natural water resources and he continued: “Salt rocks are located on the ground of Salt Lake. The salt sediment that comes to the surface with ground water is harvested only in certain amounts in certain periods. Thus, the sustainability of the amount of salt in the lake is ensured. One of our main missions is to protect the natural resources of the lake and to ensure that future generations have access to natural, quality and clean salt. On the other hand, we have made serious investments in our factory in recent years. We can produce salt hygienically with different properties for every need.”
Reliable Brand in Food Salt
Omer Cetiner stated that they were doing business with many global and local brands in food production. “We are the salt supplier of many world famous brands. As a result of the successful work of our R&D team, we make significant contributions to food producers. We also offer a wide range of retail solutions thanks to our alternative packaging options.” 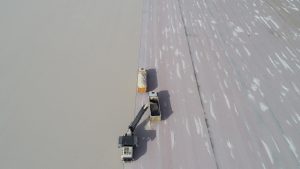 Wide Range of Product Variety
Underlining that the salt has 14 thousand different uses, Koyuncu Salt company General Manager Omer Cetiner stated that the salt obtained from Salt Lake is either sold and presented to the market as in raw form or in processed form in modern factories to meet different needs. Omer Cetiner added that in more than 50% of the products in the chemical industry, salt is used either as the main or an auxiliary raw material source. He said, “The need for salt is increasing fast all over the world. In addition to industrial salt and edible salt, we produce a wide range of products such as water softening salts, road salt, drilling salt, animal feed salts and we export to more than 50 countries. In addition, companies can contact us for their different needs and R&D requests. As Koyuncu Salt, we have rich raw material resources, experienced staff and technological infrastructure.”
The Great Power Behind Koyuncu Salt: Koyuncu Group
Koyuncu Salt company operates as a company in Koyuncu Group of Companies whose foundations were laid in 1966. It has successfully maintained its presence in the fields of fuel, automotive, vehicle inspection, energy, salt production and defense industry with more than 700 employees and an annual operating income of over TL550 million.
In the Temporary List of World Heritage of UNESCO
Situated in Central Anatolia, Salt Lake is one of the world’s largest and best quality salt production resources. It is located in the closed basin surrounded by Ankara, Konya and Aksaray provinces in the Central Anatolia Region with an area of ​​approximately 3,500 km2. Located in the middle of tectonic regions, Salt Lake is known for its rich mineral structure. It is one of the leading lakes in the world in terms of salinity. It is estimated that approximately 250 million tons of reserves is found in the vicinity of the lake. Salt production in the region has been carried out since the 1600’s and production from the lake meets 60% of Turkey’s salt consumption.
The Salt Lake basin, which hosts an enormous variety of bird species, has nesting areas for about 6,000 variety of birds. In addition, 279 plant and bacteria species are found to be living in the region. The Salt Lake Special Environmental Protection Zone, which is one of the most important natural areas of the world, has been registered in the UNESCO’s Temporary List of World Heritage due to its features. Koyuncu Salt Plant, which operates in Sereflikochisar district of Ankara, is located in the northern part where salinity is most intense. It produces in 5 pools covering an area of ​​18 km2.
koyuncu_salt
#saltproducer, #KoyuncuSalt, #manufacturing, #ingredientsproducer, #saltconsumption, #anatolia, #ediblesalt, #saltlake, #Turkey, #saltexporters
Tags: #TurkeyAnatoliaediblesaltingredientsproducerKoyuncuSaltmanufacturingsaltconsumptionsaltexporterssaltlakesaltproducer
Previous Post

MSC, a global leader for transportation and logistics in Turkey