A friend of Turkey, Maduro opened the doors to Turkish exporters in Latin America

The Association of Mediterranean Fisheries and Animal Products Exporters (ASHIB) entered fast into the South American market through Venezuela and Colombia.

Mediterranean Fisheries and Animal Products Exporters Association (ASHIB) Sectoral Food Trade Mission, signed export agreements with over 200 companies within the scope of Turkey’s Export Master Plan aiming to enter the South American market via Venezuela and Colombia. The Sectoral Food Trade Delegation, which was formed under the leadership of ASHIB President Ali Can Yamanyilmaz, with the participation of 18 exporters from 11 companies, made high-level negotiations in both countries, especially with Venezuelan President Nikolas Maduro. Yamanyilmaz related that Maduro said, “The doors here are open to you. We are ready for all kinds of cooperation schemes.” Maduro ordered officials, “What we need we will buy them primarily from Turkey.” President of ASHIB Ali Can Yamanyilmaz stressed that they targeted to earn 2 billion dollars from exports to Latin American markets in the next five years, and said, “We are waiting for the encouraging support of our state in reaching this goal.”
ASHİB delegation signed agreements with more than 200 companies in Venezuela and Colombia, for the exports of important products such as pasta, pulses, flour, rice, cheese, canned juices, olives, olive oil, sunflower oil, apple, pomegranate, chocolate, confectionery, sauce, biscuit, and etc.
‘Latin America may be an alternative to the Middle East market’
While evaluating the visit of Sectoral Food Trade Mission they made between 11th to 20th November in Latin America Food ASHIB President Ali Can Yamanyilmaz said that Iraq and Middle East countries were major markets for Turkish Fisheries and Animal Products. Last year export volume to these countries was 2.5 billion dollars. He stated that due to instability and internal turmoil in this region, opening up to new markets has become imperative for the exporters. Yamanyilmaz said that ASHIB targeted the continent of Africa and America as an alternative to the Middle East market. Venezuela and Colombia markets are important for us for this reason. Yamanyilmaz, noted that the 10-day trip to Venezuela and Colombia was very productive and successful. 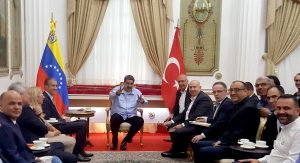 ‘Maduro, a friend of Turkey has welcomed very warm and friendly to ASHIB delegation.
Yamanyilmaz noted officials of Turkish consulate spent great efforts to make negotiations successful, and said, “Following our visit and contacts at the ministerial and undersecretary levels, President Nicolas Maduro, a fan of Turkish television serials and a good friend of Turkey, accepted the visit of our mission. He made a very friendly and warm welcome and he delivered his greetings to Turkish President Recep Tayyip Erdogan, they were close friends, and expressed his intention to visit Turkey soon. Almost all of the ministers in the cabinet were present at the meeting. We talked for over an hour with bilateral trade meeting in Turkey. In particular, they made demands for establishing joint committees for industrial and agricultural products and providing technical support. He invited Turkish companies to invest in Venezuela, a country with rich reserves in oil, gold, bauxite, aluminum and copper mines. He explained that besides food, it is a country with great potential for all sectors, especially the iron and textile industry. Mr. Maduro said, ‘The doors here are open to you. We have all kinds of opportunities for cooperation.”
“The demand for each product is very high, there is no shortage of port and warehouse.”
Yamanyilmaz, who explained that they had meetings with nearly a thousand business people from more than 200 wholesale food import companies in Caracas, Venezuela and Bogota, Colombia, said: “Venezuela with 30 million inhabitants and 55 million inhabitants. We see Colombia as the springboard when exporting to South America. Turkey have around 120 million dollars exports to Venezuelan, 72 million dollars of it are food products. During our meetings in Venezuela and Colombia, our delegation established important export connections for exports of products such as pasta, pulses, flour, rice, cheese, canned juices, olives, olive oil, sunflower oil, apple, pomegranate, chocolate, confectionery, sauce, biscuit. In Colombia, executives of Corabastos Food Distributors Association pledged assistance in the distribution of all types of products and goods entering the country. Food suppliers in these countries preferred our products because of their quality and competitive prices. Venezuela has no shortage of ports and warehouses in South America’s closest point to Europe. Our target is to export $ 2 billion to South America and countries in the middle of the continent over Venezuela in the first 5 years. As Venezuela and Colombia are included in the customs union on the American continent, we think we will be effective in all American markets through these countries. We expect free trade agreements with the two countries we visited in a short time. If this is achieved, we can offer more competitive prices and be much more effective in these markets.”
#venezuela, #SouthAmerica, #Maduro, #Americanmarket, #Export, #Turkey, #AKIB, #food, #Colombia

Helis Draje set out to introduce dragee art to the world