The industry for sweets and snacks is ready to take off again!

The signals of the sweets and snacks industry are set to re-start: After the successful anniversary year with 1,774 exhibitors from 76 countries and around 37,000 visitors from 146 countries, ISM, which is taking place from 31.01.-03.02.2021, aims to continue on its course of success even in these difficult times. When the early bird campaign expired at the end of May, initial positive results had already been achieved. 501 companies (previous year 566) from 55 countries have already registered so far. Whereby, the world’s largest trade fair for sweets and snacks has recorded slight losses in the amount of area booked. Nevertheless, with 76 percent (previous year 86 percent) of booked area, ISM is on a good course considering the difficult economic situation due to the Corona pandemic. 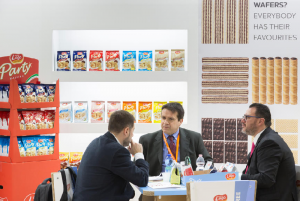 With 120 applications (previous year 130) and 9.149 square metres of booked space (previous year 9,187 m²), both the number of applications from Germany and the area booked are practically unaltered. Overall, companies from 55 countries (previous year 60) have registered for ISM 2021 to-date.   In addition to Germany, Italy, Belgium, Spain, Great Britain, Poland, France, the Netherlands, Turkey, the People’s Republic of China and Greece are among the top 10 countries represented the most strongly at ISM in terms of area booked. Also in the case of the pavilions, alongside numerous European countries, a host of non-European countries such as Brazil, Hong Kong and Taiwan are represented. Newcomers here include Latvia, Portugal and Thailand.

There have been reductions in the area booked particularly for the pavilions that are more strongly affected by COVID-19, however these countries do have the option to expand the space at a later date. France and Turkey on the other hand are recording an increase in the area booked of 3.3 percent and 14 percent respectively.

The fact that 23 newcomers from 18 countries have already been recorded is giving the trade fair organiser cause for particular optimism. Eurobrands Lebensmittel, Famobra, Goldbek Sweets and Husar Mandelmanufaktur from Germany have confirmed their participation.

“In the course of our dialogues with the exhibitors we are not only sensing the many insecurities, but also a spirit of optimism. For example, who would have reckoned with applications from new exhibitors from Australia or Iran. This allows us to look ahead to ISM 2021 with confidence. For us it is important that we offer together with, but above all for our customers a marketplace, which supports the industry in boosting both the national and international business. The personal encounters and the professional exchange, which nothing can replace, are also key aspects. These will no doubt take place under extraordinary framework conditions this year, because the safety and health of our exhibitors and visitors are of central importance,” explained Sabine Schommer, Director ISM.

Dr. Carsten Bernoth, Chief Executive Director of the German Association of the Sweets Industry e.V. (BDSI) emphasised the significance of ISM as a business platform too: “The 50th ISM in 2020 was the last international sweets trade fair before the outbreak of the COVID-19 pandemic. The medium-sized companies of the sweets industry worldwide are suffering under the effects of the pandemic. We thus hope that ISM 2021 will open the gate to better times and will strengthen the international sweets trade. Who could be more capable of achieving this than the most important international exhibition of sweets?”

Innovations at ISM 2021
As a conceptual innovation there is going to be a specialised trade section focusing on the small volume business with sweets and snacks for the first time, which is entitled “Finest Creations – hand-crafted”. This exhibition section unites craft establishments, whose visitor target group comprises of confectioners, cake shops and specialised sweet shops. Exclusively micro-businesses predominantly from Germany are initially allowed to participate here. The new exhibition section will be located in Hall 3.1.

Anuga 2023 under starter’s orders: Interested companies can profit from the early bird campaign up until 30 September 2022

Spirit of optimism ahead of IFFA 2022: New perspectives for the meat and protein industry