Anavarza Bal introduces two novelties
Refreshing the image of honey industry with its brand new look, Anavarza Bal prioritizes the value of customers in the details of its change. Competing with the world brands in terms of its product change, the brand gets ready for “powder honey” after adding “cream honey” to its product portfolio and it has set its goals as 40 million TL and 2,500 ton product capacity for 2014. Can Sezen, General Manager of Anavarza Bal heralded the foundation of ‘Anavarza Children’s Theater’, which is the first of its kind in the sector and founded with the partnership of Nedim Saban, as well as its ‘powder honey’ investment. Completing its meticulously organized relaunching process after months, Anavarza Bal has become the modern face of the honey industry opening its doors from its hometown Anatolia to the world. Laying its foundation in the industry with a traditional but modern, rooted but innovative, serial but non-fabricated concept, the brand has re-configured itself in order to refunction the reputation of honey from packing hygiene to quality standards.
Anavarza Bal has introduced ‘cream honey’ to Turkey, which is commonly used throughout Europe and worldwide to Turkey with its own production methods and made an important investment in ‘powder honey’ which is first of its kind in Turkey and to be released in 2014.
The Goal is to Reach 40 million TL Turnover in 2014 with New Investments
Opening out the second innovative product category of packaged honey industry in our country, Anavarza Bal has increased its 450- sqm-product line to 12,000 sqm for this purpose. Anavarza Bal is still one of the two biggest companies of Turkey’s honey industry and it has cleared its nine-year goal. Closing 2013 with a production of 2,000 tons, the company has declared its production goal as 40 million TL turnover and 2,500-ton production in 2014; 3,000-ton production in 2015 and 5,000 tons of production in 2023.
Can Sezen: “We Provide our Current Sales Revenue from Domestic Market”

Making an assessment on behalf of the company, Can Sezen, General Manager of Anavarza Bal said the following: “We can say that 2012-2013 period is a technology, plant and branding period for us. Of course, it is impossible to perform everything in such short time. Our long-term goal is to be the leading brand of honey sector in Turkey by 2023. Our short-time project is to produce Powder Honey. This year we’ll offer Powder Honey to our consumers for the first time. We’re reviewing our infrastructure about our goal and we make new investments. Still, we keep our existence in local chain supermarkets and some international chains. Although customer group segmentation is not easy due to the scope of retailing network, we know that the consumption is heavily based on consumers aged 35 and above.
Competing with the world is extremely difficult for Turkey now. We are also facing these challenges. For this reason our current sales revenue is based on domestic market”. In Turkey Total Production is 80,000 Ton; Total Honey Sales is 50,000 Ton
In Turkey, while about 80,000 ton of honeys is produced, only 50,000 ton of it is sold. While melting 30,000 ton with domestic consumption, total honey and bee products volume of about 500 million TL is remarkable. Packaged-branded honey market meets 200 million TL of this total volume. 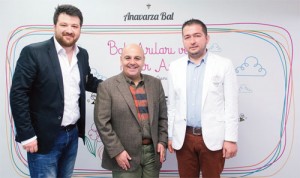 Consumers Aged 35 and above Consume Much More
Can Sezen, General Manager of Anavarza Bal stated that there are more than 6.5 million hives and about 80,000 registered apiarists in Turkey and non-productiveness and high-costs are the primary problems faced in the sector. According to Sezen providing a general profile for honey consumption in Turkey, while the most consumed honey is flower honey, people aged 35 and above consume much more honey. The ratio of those who consume honey in winter season has increased to 82.47% and on the other hand, 13% of the society consumes other bee products as well as honey.
Anavarza Children’s’ Theater Opened Its Doors in 2014
Dedicating itself to the protection of Anavarza Ancient Town, as well as the protection of honey, as a part of its social responsibility Anavarza Bal opened the doors of Anavarza Children’s Theater in 2014. Thanks to the supports of Institute of Behavioral Sciences, Department of Children and Youth, Anavarza Children’s Theater – founded by Anavarza Bal and Nedim Saban with the partnership of Tiyatrokare – will tell children the vital role of bees in the ecosystem, their lives and honey, the most precious gift of the nature, with the play named “Honey Bees & The Naughty Bear”.

Pour a cold one anywhere with Perlick’s new Mobile Tap