by fdturkey
in News, News In General
7 min read

In irrigated areas, wheat, cotton, lentils, sunflower, forage crops and corn, the second product, are produced. Irrigated areas are planted each year, an average of 500 kg of wheat, as well as a second crop from 800 to 1000 kg / decare of corn is taken around.
In recent years, drought and corresponding contraction of production in our country and in the world has been seen as a problem to be solved urgently considering the future of our country by General Directorate of Agricultural Enterprises (TIGEM) which is responsible for the production and distribution of certified seeds in our country.
For this purpose, Turkey’s largest irrigation and mechanization projects were implemented in Ceylanpinar Agricultural Enterprise which constitutes 51% of TIGEM’s total land assets. Ceylanpinar Agricultural Enterprise with 1,761,261 decares of land assets is the largest farm that continuously and simultaneously irrigable land. The project, responsible of the irrigation of 500 thousand decares of land using groundwater potential, was started in 2009 and the period was completed at the end of 2011 as planned, costing 300 million TL. In the enterprise, while 109.000 decares was put into irrigation in 70 years, 500,000 decares has been used for irrigation in the past 3 years. The most important feature of Ceylanpinar State Farm in view of irrigation is that uninterrupted irrigation can be done throughout 609,000 decares at the same time. In addition, 310 thousand acres of land will be irrigated by means of Mardin – Ceylanpinar Main Irrigation Canal which will be constructed within the framework of the GAP Action Plan. As a result in Ceylanpinar, irrigation of about 920 thousand hectares of land will be ensured in 2016. With this feature, Ceylanpinar Agricultural Enterprise is the largest farm that continuously and simultaneously irrigable land in the world. In this article, the studies performed in between 2009 and 2011 in TİGEM’s land are presented in detail. As a result of the incorporation of stud farms and cow barns with state farms in1984; Ceylanpinar Directorate of Agricultural Enterprises was found as a stateowned enterprise depending on the General Directorate of Agricultural Enterprises, however, it was converted to state economic enterprise and its mission continues in this status. Ceylanpinar Agricultural Enterprise is located in borders of Ceylanpinar County, Şanliurfa City in the Southeastern Anatolia Region of TURKEY. The land of the enterprise is surrounded by Ceylantepe and Kizilltepe counties in the East; Akcakale and Harran counties in the West; Viransehir county in the North and Syria in the South.
The length of the enterprise in the East- West direction is 80 km long, while the width in the South-North direction is 40 km. The lands of the enterprise are located between 36° – 37o20’ east longitude and 39o30’ – 40o10’ of north latitude. The height of the enterprise is 397 meters above the sea level.
The land is generally inclined North West to South East. Aşık’s position has the highest altitude with 527 meters and Akrepli and Habur units have the minimum altitudes, 370 m. The enterprise’s land with 1,761,261 decares constitutes 9.3% of Şanlıurfa province, also having 4.5% of the land that will be irrigated with GAP project.
In the enterprise, arid climate prevails; summers are hot and dry whereas winters are mild and rainy. 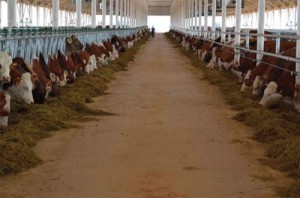 Rainfall is low but evaporation is high. The highest average temperature is 40.6 °C during the summer months, while the lowest average temperature in winter is 4.0 °C. The last 10-year average rainfall of the enterprise, virtually none of which was received in June, July and August, is 257.5 mm. The annual maximum average relative humidity is 98% and the lowest average relative humidity is 16%.
Ceylanpinar Agricultural Property has an important position among the other lands of TIGEM due to the fact that it has totally 1,761,261 decares of land assets which is 51% of the total land area of TIGEM. The enterprise is also the economic and social assurance of Ceylanpinar county with a population of 60.000.
Production Activities in Ceylanpinar TIGEM Crop production activities:
Biennially production of wheat, 280 kg/ decare, increased 3.6 fold each year to 500 kg/decare and the amount of certified cereal seed preparation has increased from 63 thousand tons to 225 thousand tons.
The whole requirements of certified seed grain of the provinces located in GAP scope and the important part of aforementioned needs of the other provinces are substantially met. Corn, soybean, sunflower and forage production is possible with the expansion of irrigation. The number of cattle at the end of the year 2012 has been increased to 10 thousand. Thus, it has been contributed significantly to meet the needs of breeding animals of our country.
Wheat-fallow cultivation is implemented in dry farming areas that cannot be irrigated, however, a wheat-lentils-fallow cultivation program is applied in the part of areas which have slightly more rainfall. In irrigated areas, wheat, cotton, lentils, sunflower, forage crops and corn, the second product, are produced. Irrigated areas are planted each year, an average of 500 kg of wheat, as well as a second crop from 800 to 1000 kg / decare of corn is taken around. The capacity of seed processing plant are increased to 90 tons / hour by helping of investments provided in recent years. Pistachio is for production from woodland plants in dry conditions and breeding.
The average of 650 tons of pistachio is made annually. In addition, approximately 40,000 Pistachio seedlings (tubed-grafted) are produced and distributed each year.
Livestock activities: 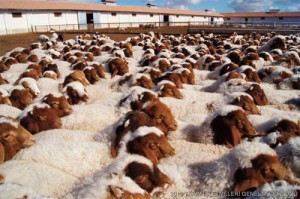 Cattle farming activities constitute an important part of livestock operations. In the earlier years (1945-1950) of the enterprise, cattle-raising activities were initiated with Indigenous Southern Yellow Red (GSK) collected from the area, however, the performance characteristics of this breed has been seen to be unsuitable for business administration.
Based on this, farming of Friesian breed dairy cattle, has been started gradually since 1969. The cattle raising activities are mainly carried out by Gokçay Cattle Raising Unit. In this unit, high-tech milking for 60 cattle and herd management systems are available. Any shortage in supply of concentrate and roughage are not being experienced.
In the enterprise, sheep raising activities are executed with both extensive and intensive cultivation together. Sheep raising facilities are established on 11 different sites which are barren land and not suitable to other agricultural activities. The enterprise has the largest ivesi sheep population in the world. In Ceylanpinar enterprises, operations are continued by an average of 25,000 head in the main lineup. The Ivesi sheep breed is adapted very well to the region, and it has high milk yield.
There is a big demand in breeding every year. Both the quantity and capacity of Ceylanpinar pasturelands are inadequate. There is no problem in the quantity of concentrate feed and roughage for the winter months. In the enterprises, shepherd services are purchased by contractors.
Sheep raising activities are of strategic importance for Ceylanpinar. Sheep rising is important to prevent invasion of nomad’s and local community’s livestock on Ceylanpinar enterprises pasturelands. Because the gazelle, the species from which the Turkish name of the enterprise was derived, has been decreasing in numbers, 23 gazelle were protected in 1977. At the present time, there are 1500 gazelles in the enterprise. The main objective of the sale of gazelles is to provide keeping this species and increasing population, rather than getting any income to the enterprise. About 150 gazelle are sold every year. 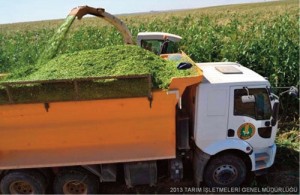 Ceylanpinar Agricultural Enterprise Irrigation Project (2009-2011)
In recent years, taking into account of the future of our country, declining production problem in parallel with drought in our country has been found extremely important by TIGEM which are responsible for certified seed production and distribution and also wish increasing the capacity of production.
Ceylanpinar Agricultural Enterprise with 1.761.261 decares of land assets is the largest farm that continuously and simultaneously irrigable land. In Ceylanpinar Agricultural Enterprise, comprising 51% of total land size of TIGEM, the largest irrigation and mechanization project, unprecedented works in TIGEM, was launched in 2009.
Making use of the potential for groundwater to irrigate 500 thousand acres of land and costing a total of L 300 million, the irrigation and associated mechanization project, was completed according to plan at the end of the year 2011.
In enterprise while 109,000 hectares of land has been proceeded irrigation for 70 years, 500,000 hectares of land has been irrigated in the last 3 years.
With the completion of irrigation projects at the end of 2011; in addition of already 294 deep wells obtained from the water-irrigated 109,000 per hectare, 1,203 units deeper wells were drilled and 258 thousand hectares (52%) center-pivot, 203 thousand hectares (40%) semi-fixed and 39 thousand hectares (8%) of drip irrigation system has been established and 500 thousand hectares of land is irrigated by making a total amount of irrigated land has increased to 609,000 hectares,
In addition, 310 thousand acres of land will be irrigated by means of Mardin – Ceylanpinar Main Irrigation Canal which will be constructed within the framework of the GAP Action Plan.
As a result in Ceylanpinar, irrigation of about 920 thousand hectares of land will be ensured in 2016.
Within the scope of the same project, various power 124 tractor and connected equipment, providing considerable savings in terms of fuel, time and labor, was purchased.
Getting 75 large powerful tractors with 200- 350 horsepower, much stronger than the machinery previously used in the enterprise.
25 pieces of 13 meter bodied 6.5 meter working width plows, 26 pneumatic grain sowing machines, 36 direct sowing machines, 4 30 meter working width self propelled spraying machines, enough duplexing combination instruments and 13 pieces of forage crops, machines and other equipment having the latest technological innovations have been purchased for use with these tractors.
Within the framework of the project, a 166 ton/hour capacity drying facility, 38,000-ton crop silo and 40 ton/hour capacity seed processing plant was established and 1 color separator system and 1 fire truck with has been procured.
The important areas, property land and all facilities of the enterprise are followed by “Camera Security System, and also in order to increasing labor productivity and fuel oil savings service vehicles, tractors and other vehicles are followed by “Vehicle Tracking” and “Fuel Automation System”.
Additionally 25 km long wire fence had been constructed for security.
As a result of the project, enterprise wheat yield will speed up from biennially 280 kg / hectare to 500 kg/hectare each year, a 3.6 fold increase. Likewise the amount of certified seed grain preparation will increase from 63 thousand tons to 225 thousand tons. 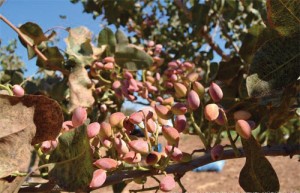 Finally certified seed grain requirement of GAP provinces and all the other provinces shall be met substantially. With the expansion of irrigation, the second product including corn, soybean, sunflower and forage production will be possible from the current level of, 2,700 head of cattle in late 2012, to 10,000.
Thus, it will be a significant contribution to meet the needs of breeding animals in our country.
Along with new irrigation land, 74 technical and administrative contracted officers, including 473 permanent workers and 903 contract workers have been added to the total of 1,450 persons were employed to meet the increasing business. As a result of the commissioning of the project a total of 3,670 additional jobs will be provided.