Vefa also means boza in Turkey, a special drink that takes its name from a quarter in Istanbul
The story starts in 1870 when Haci Sadik Bey immigrates from Prizren, Albania, to Istanbul. The founder of Vefa Bozacisi, Sadik Bey settled in Vefa, a prestigious quarter in Istanbul, where royal, aristocrat, wealthy families and officials live. He was one of the well known sellers of boza in his hometown. He observed that, in this great and magnificent city, there are about 200 makers of boza in their small shops and houses. Then the boza has been sold as a dark, watery and sour form as a thick slightly fermented drink made of millet. He tried another method for production and he developed the now known boza, thick, light yellow, slightly sour beverage that has newly fermented bubbles in it. He opened his first official business, a mom-and-pop shop, in Vefa in 1876. The name of boza shop was Vefa Bozacisi where he developed a standard to produce and sell this traditional beverage that has been selling since than, generation-to-generation. Haci Sadik Bey produced this special Turkish beverage for many years in order to preserve its stiffness and taste and later he handed his business to his son Ismail Hakki Vefa and provided his adaptation to the production of Vefa Bozacisi. As the 4th generation now, they have the tenacity to sustain the production of boza, the traditional beverage business started by the grandfather and brought to the present day as a result of the devotion and efforts ou all the family members, with a great harmony and in the best way, staying loyal to the traditions of the family. 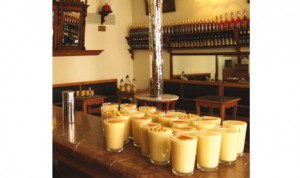 “Prodonium, the only company in Turkey to industrialize garlic”

Turkey – the dreamland of seafood

Turkey - the dreamland of seafood