Aves is ambitious in Iraqi market

Almost completing Turkey’s the largest integrated vegetable oil plant Aves company has highly ambitious plans for market in Iraq.
Besides the one in Turkey, the company has an investment of 100 million Euros to produce vegetable oil in Erbil, Iraq. Plant in Mersin has been operating since the end of 2013; % 80 of investments completed in Erbil factory. Senan Idin, chairman of Aves Co. Inc., says that the Safya brand vegetable oil is expanding its penetration in Turkey, a difficult market in the region. There are 8 different companies belonging the group, mostly are trading companies. He said, “We met with the food industry during our talks with a petroleum company in Iraq who has been supplying sunflower oil. We signed a strategic cooperation agreement and started to buy oil from Turkey, Argentina, Ukraine, and Russia. In five years we have been supplying % 35 of total imports of Turkey and become market leader. During this period, we sold % 75 of our share in the oil storage terminal to NuStar, one of the largest storage companies in the world. Then we decided to build a oil processing plant in Mersin.
Operating at full capacity
Senan Idin said, “Our production capacity accounts for % 18 of total consumption in Turkey. We can meet % 14 of feed production, and % 17 of bio-diesel production. 500 thousand tons of sunflower seeds will be processed annually when the investments are completed. Filling stations are able to process 250 thousand tons of oil and 50 thousand tons of bio-diesel. Almost all of our production is exported under Safya brand. Our plant in Erbil will also be the biggest in Iraq, that will be operational towards the end of the year. We aim to be global player in the world by 2016.” “Operating at full capacity export almost all of the production. We supply about 300 thousand tons seeds from Turkey, Bulgaria, Rumania, Moldavia, USA, Brazil, Paraguay, Argentina, Ukraine and Russia. Most of exports go to Iraqi market, where the major buyer is government who distributes it to its citizens free of Senan Idin, chairman of Aves charge. That means that every household has our products. Turkey is one of the largest bases of supply in the food distribution of UN in Middle East and Africa. We will increase our share in foreign markets by bidding to the tenders in the future. Rising competition in supply markets can only be prevented by having more capacity for production and sales. We deliver our exports to Iraq market with our own vehicles having the advantage of our proxy location to Mersin port.” 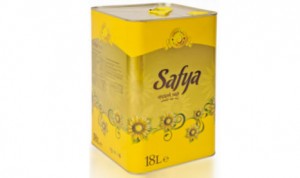 Incentive in agriculture
“Besides vegetable oils, we are also assertive in feed sector. We produce pulp from soya beans. In the near future, bio-diesel section of the plant will be operational thus we become an integrated facility. We will have 50 thousand tons of bio-diesel capacity annually. 300 thousand tons of is needed in Turkey where the use of it is optional. Use of bio-diesel is compulsory in Europe up to % 7. Oil imports will decline as much as bio sources are utilized. Government should provide incentives to increase the consumption of bio sources.”
Hotel investment planned
“Our company has established a strategic cooperation agreement in 2011 with NuStar company, who is one of the largest oil storage companies in the word. We have also been managing Bomonti Park shopping center in Istanbul. We own the first and the only open seaport in Kazanli, Mersin, that is being utilized in the storage and transport of oil products and is serving to four licensed storage companies. Last year our sales were about 500 million dollars. We aimed to be one of the 250 largest producers in the world and among top 100 exporters. We develop a new investment plan of 200 million dollars in Mersin, to build a five star hotel.”

Puratos in Turkey with chocolates since 1987