The French loved the fish imported from Turkey

Seafood Promotion Committee of Aegean Union of Exporters promoted Turkish products in SIAL Food Fair held in Paris, France.
The French buyers liked Turkey’s fish varieties and the way they were cooked by famous Turkish chef Ibrahim Onen who prepared special dishes for French tastes. About four thousand visitors tasted the fish food samples. Organized alternately with ANUGA food fair, SIAL Food Fair is one of the leading fairs in the food category. Melih Isliel, the head of Seafood Promotion Committee said, “We participated in Sial 2010 and in Anuga 2013. We try to empower the seafood products from Turkey with an aim to expand our presence in the European markets and especially in France, which is more competitive. In the first ninemonth seafood exports from Turkey increased 23% and went beyond 500 million dollars level. For 2013, our target is to sell 1.5 billion dollar worth of products. Exports to France, who is a net importer of seafood, was down to 14 million dollars. We can recover it back to 18 million soon.” Sinan Kiziltan, chairman of Aegean Seafood and Animal Products Exporters was among the participants. He said, “French like sea bass and sea bream varieties as they suit their tastes. We also export frog legs and snails to this country, besides fresh and processed fruits and vegetables, bakery, tobacco, and sweets. Per capita fish consumption in France, a country that ranks on fifth place in terms of quality of life, is about 23 Kg/year. We will expand our promotional activities in this market and aim to get about 100 million dollar income from exports.” The fair was participated by 6300 companies, 85 % of them were foreigners and visited by 140 thousand people from about 10 countries. 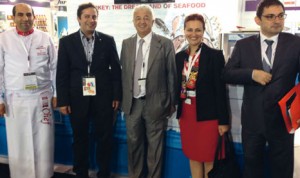 Turkey has the potential to be a logistics and production center