Growing over an average of 20% in exhibit space and 35% increase in visitors each year, SIAL Middle East is now recognized as a must attend event.
industry. As one of the few self-sufficient countries in food, Turkey has a strong interest in this market as almost all food exporting countries. Every year hundreds of food exporters go to Dubai for Gulfood and Gulfood Manufacturing and tens of companies to Abu Dhabi for Sial Middle East. This year there will be 35 Turkish companies at the Turkish national pavilion at Sial. With a 37% increase in visitor numbers at the 2013 edition, SIAL Middle East has cemented its position as the genuine business class event for the food and beverage industry in the region. SIAL Middle East 2013 attracted more than 17000 attendees over 3 days to meet more than 700 exhibitors from 52 countries. The fair is now set to record another success in Abu Dhabi with the participation of a considerable number of international companies. Abu Dhabi National Exhibition Center will host national pavilions of Argentina, Austria, Canada, China, Egypt, Indonesia, Italy, Korea, Lithuania, Malaysia, Morocco, Pakistan, Poland, Portugal, Sri Lanka, Thailand, Taiwan, Turkey, USA and Vietnam. The exhibitors’ latest innovations will be displayed in 21 international pavilions spread throughout the Abu Dhabi National Exhibition Centre. The event will consist of a three-day conference, a buyer program and finally an international chef competition called La Cuisine by SIAL in which around 600 chefs from four continents will compete across different categories. 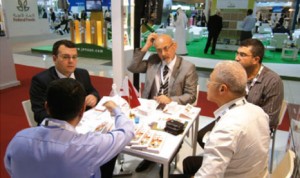 SIAL Middle East 2014 will be held in partnership with the Abu Dhabi Food Control Authority and the SIAL group, which is the world’s largest host of B2B food exhibitions. GCC food consumption to hit 49m T by 2017 The Gulf countries will consume about 49.1 million tons of food annually by the end of 2017 thus registering a compounded annual growth rate of 3.1 percent, said a report ahead of SIAL ME, the fastest growing professional business platform for the food, drink and hospitality industries. Of the six Gulf countries, the UAE will become the largest consumer in per capita terms, according to the investment bank Alpen Capital’s revised 2013 GCC Food Industry Report. The UAE’s per capita food consumption currently stands at 1,486 kg per year – 27 percent more than Oman, which consumes 1,095 kg of food per capita annually, the report stated. Saudi Arabia currently consumes 872 kg of food per capita, Qatar 852 kg, Kuwait 634 kg, and Bahrain 453 kg per capita, while by 2017, per capita food consumption for the entire region is forecasted to reach 983 kg, said the report. Owing to its considerably larger population, Saudi Arabia will continue to be the biggest food consumer by volume, accounting for 59 per cent of GCC food by 2017 (29 million tons), while Qatar’s appetite will outpace that of other Gulf countries, increasing by 5 per cent by 2017 to reach two million tons, it added. Looking to satisfy the growing appetites of the region will be more than 1,000 food, beverage and equipment companies from 40 countries at SIAL Middle East, said the organizers.