IFFA to be juicy and well cooked once again

Around 960 exhibitors from 47 countries, including all market and technology leaders, have signed up to present their latest products and innovations at the six-day fair. The coming IFFA to be held in Frankfurt am Main on 7-12 May 2016 will cover 110,000 square meters of exhibition space in seven exhibition halls and is already almost fully booked up. Messe Frankfurt expects to welcome around 60,000 trade visitors from 140 countries to this No.1 trade menu of the meat business.
IFFA, being held in Frankfurt for 45 years and has been developed into a leading trade fair for the meat industry today stands out as the No.1 medium for the meat industry. Announcing the launch-in of IFFA 2016 to be held on 7-12 May 2016 in Frankfurt am Main, in a recent press conference held in Frankfurt, the organizer Messe Frankfurt and IFFA Advisory Board have been utmost positive and confident that the upcoming event will once again be top event for the meat sector.
Expecting some 960 exhibitors from around 50 countries, including all market leaders, to present their top innovations in the fully booked-up exhibition halls on around 110,000 square metres of exhibition space to show new products, technologies and solutions for all stages of the meat-processing chain and anticipating around 60,000 trade visitors from over 140 countries, Wolfgang Marzin, President and Chief Executive Officer (CEO) of Messe Frankfurt said that, “IFFA will remain the most important innovation platform for investment goods along the entire process chain. The majority of our exhibitors, who include all world-market leaders, launch their innovations onto the international market at IFFA. Together with our partners, I am delighted to once again announce the top event for the meat sector.”
One of the most important groups of visitors at IFFA comprises decision makers from the butchers’ trade. Heinz-Werner Süss, President of the German Butchers’ Association (Deutscher Fleischer-Verband – DFV): “IFFA 2016 is the unrivalled event of the year for the meat sector and the excitement in the butchers’ trade is nearing its climax. IFFA is of vital importance to us on a variety of levels. Naturally, it is a comprehensive source of information for our members – nowhere else is it possible to find out more about the latest developments. However, it is also the meeting place for the whole sector. With all its events for the butchers’ trade, with its important competitions and with its innumerable new products, this year’s IFFA will once again underscore its position as the world’s leading trade fair for the entire meat sector. We are very much looking forward to it.”
IFFA is not only the most important exhibition for butchers’ trade, but also for the food processing and packaging machinery products, Richard Clemens, Managing Director of the Food Processing and Packaging Machinery Association of the VDMA, conceptual partner of IFFA confirms: “With its clear focus on meat, it offers not only an unrivalled spectrum of solutions but also a great concentration of experts. There, the spotlight is on innovations and trends oriented towards the needs of the market, which generate decisive impulses for shaping the future. The high degree of internationality at IFFA shows that Frankfurt is the firmly established meeting place for the global network of the meat industry.”
Top levels of internationality on the exhibitor and visitor sides
The figures confirm that IFFA is top in terms of both exhibitor and visitor internationality. 57 percent of the companies taking part as exhibitors in 2013 were headquartered outside Germany. The top ten exhibitor nations excluding Germany were Italy, the Netherlands, Spain, the USA, France, Denmark, Austria, the United Kingdom, China and Poland. With over 400 companies, the biggest exhibitor contingent came from Germany. The proportion of visitors from abroad was 61 percent in 2013 with trade visitors from the industry, retail trade and butchers’ trade taking advantage of the broad range of products and services at IFFA. Roughly one in two foreign visitors came from Europe. After Germany, the top ten visitor nations included the Russian Federation, Italy, the Netherlands, Spain, Poland, Austria, the USA, Switzerland and China. 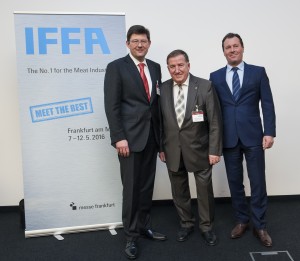 Compact and transparent layout
The restructured and enlarged layout at IFFA 2013, incorporating Hall 11 for the first time, was a great success and will be retained in 2016. Thus, visitors will be able to see the complete spectrum of machines and plant in the western section of Frankfurt Fair and Exhibition Centre, in Halls 8, 9 and 11. Key players from the packaging, supply facilities, measuring and weighing technology segments will be making their presentations on the two floors of Hall 11. Leading exhibitors from the processing and slicing segment are located in Halls 9.0 and 9.1 while the focus in Hall 8 is on processing.
In Hall 4, in the eastern section of the Exhibition Centre, visitors will find suppliers for packaging materials and ‘Sales – everything for butchers’ shops’, as well as top exhibitors from home and abroad with ingredients, spices, additives and casings.
Top themes at IFFA 2016
The global meat industry is a dynamic growth market. Populous countries of Asia, Latin America, East Europe and Africa are characterized by rising incomes and, in many cases, a corresponding increase in meat consumption. Therefore there is a mounting demand from these countries for modern and efficient technology for processing meat and meat products. Besides quantity, quality is playing an increasingly important role as demands on product safety, quality and traceability rise. In western countries, the focus is on productivity optimization through energy efficiency, high output, straightforward cleaning processes, greater automation and sustainability.
In the butchers’ trade, the key to future success is adaptation to new consumer eating habits and trends, such as convenience foods, walking food and supplementary products for butchers’ shops. Moreover, regionalism plays an important part in the buying decision. Investments in energy efficiency and the simplification of working processes, as well as improvements in hygiene on both the sales and production sides are also important themes in the sector.
Automation: with greater efficiency and cost effectiveness for improved product quality
IFFA will once again give trade visitors the opportunity to gather in-depth information about machinery and equipment for all stages of the process chain, from slaughtering, via production, to packaging. In this connection, the focus of the meat-processing industry is increasingly on intelligent linkage of the individual stages and the increased use of modern information and control technology. Thus, the range of products and services being offered by IFFA exhibitors for these subjects will be correspondingly extensive.
Exact portioning and sorting
An important driving force of innovation behind increasingly efficient processing lines is the growing demand for portioned and fixed-weight packaging, and convenience products. The fully automatic portioning and insertion of filets, steaks, sausage slices and other meat products in the packaging call for high-tech solutions. Most systems consist of laser and / or x-ray scanners, with integrated scales, feeding units for the slicer and the slicer itself installed at the top of the processing line, as well as downstream conveyor belts, which take the cut products to multi- track belt sorters with sophisticated shuttle systems or sorting and insertion robots that, for example, place the packages in the downstream tray sealer. 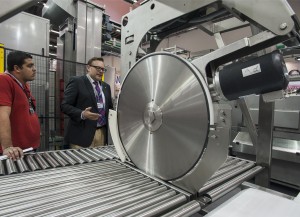 Robot-aided automation as a value-added factor
Conventional automation is often too complex, too expensive and, in particular, insufficiently flexible. In most cases, converting machines designed for specific tasks is impracticable or only possible with a big input of materials, time and money. However, this is not the case with industrial robots. Thanks to their extraordinary flexibility, speed, precision and repeat accuracy, they are key elements for greater efficiency, quality and sustainability no matter what the task, e.g., product handling, quality control or sorting and packaging. But what characterises a successful robot application? Superficially, an industrial robot can only move a fictive tool-centre point quickly, precisely and with a high degree of repeat accuracy within a defined working area. It is the grabber or tool, the cameras and sensors, highly developed software, intelligent control systems and the programming / configuration by qualified personnel that make robots universal helpers. Today, they are to be found in almost all parts of the meat-processing chain – from slaughtering to packaging meat and sausage portions. In fast pick & place operations, robots can take all different kinds of meat and sausage products from conveyor belts and place them in the correct trays, in some cases at the rate of up to 240 cycles per minute.
In smokehouses, manually hanging and transferring the smoke sticks with strings of sausages is frequently a bottleneck. Moreover, it is time, personnel and cost intensive. Robots can carry out this work more precisely and faster. In addition to personnel savings, the advantages include, above all, a significant increase in terms of hygiene thanks to the abolition of manual operations and a reduction in wastage because there is no damage to the sausages, something that is often unavoidable in manual operation.
Robot-aided automation in slaughtering and dismembering facilities continues to be one of the biggest technical challenges. A task that humans can master thanks to their senses and many years of experience is a major problem for robots. Due to different rates of growth, animals vary greatly in terms of weight, size and the proportion of meat to fat, as well as bone size and density. Nevertheless, there are also some economic and, in particular, high-performance solutions in this field. The spectrum of applications includes grasping front-leg hooves and necks, removing the rectum, opening the abdominal wall, separating the pelvic bone and sternum, as well as splitting pigs, all of which is made possible by advanced 3D scanners that determine the topology of the animals after slaughtering. The information obtained is analysed by the control software, which then generates the cutting paths to be used by the robot. In dismembering plants, the robot blades are controlled via vision software. 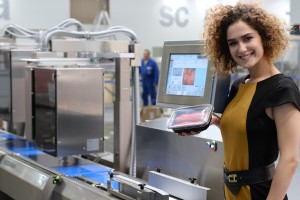 X-ray technology for inline fat analysis
The still widespread extraction of lipid using the Soxhlet process is not only time and labour intensive but also, due to the sampling procedure, not particularly accurate. Today, technology is developing more and more in the direction of continuous inline checks and modern x-ray technology in accordance with the DEXA process. This is a highly efficient method of lipid determination and suitable for raw, natural meat products, including refrigerated or frozen meat, lose or packed in boxes or cartons – as long as they are free of other ingredients. Thus, x-ray technology offers users continuous, 100-percent product control including data documentation for traceability.
These examples represent only a fraction of the possibilities opened up by modern automation for meat and sausage processing. Visitors to IFFA 2016 will have the chance to find out in-depth about the state-of- the-art and future developments in this field.

BizPoint will be the passion of coming years!