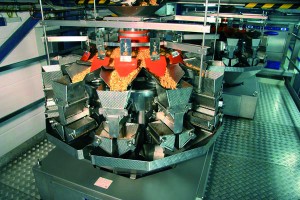 A major German nut processor has cut average giveaway from 2g to 0.4g per 200g can of nuts by switching from volumetric methods to Ishida multi-head weighers.
Felix GmbH & Co. KG, based at Schwerte, near Dortmund, is part of The Nut Company (TNC), Europe’s largest nut specialist, and processes products including peanuts, cashews, almonds and macadamia nuts under the famous ültje brand in Germany, Austria, Switzerland, Italy and Slovenia, and the Felix brand in Eastern European markets.
An extremely flexible system has been installed for packing high value nuts into cans with re-closable plastic lids. It consists of two Ishida weighers in a paired parallel configuration. Nuts can be fed to one or both weighers, and each weigher can double-discharge (i.e. function as two separate weighers and discharge accurate weighments into two cans at once) for added speed.
The two streams of filled cans, one from each weigher, then converge for sealing under modified atmosphere, followed by coding.
Ishida Multihead Weighers
The new weighers are of a ‘paired hopper’ design. While each has 12 weighing heads and 12 pool hoppers, each pool hopper actually feeds two weigh-hoppers, making 24 in all. The speed and accuracy achieved is therefore what might be expected of a much bigger multihead. These weighers, with their compact 0.8 litre hoppers, are perfect for the relatively small target weights involved.
Another advantage of the weighers is their compact design, which enables them to fit into a height-restricted area, while leaving room for throat metal detectors on all the outlets.
The new line has cut giveaway on a 200g can from 2g to 0.4 g, a reduction of 80%. This is particularly important in the case of products such as cashews, which, even at the raw materials buying stage, are many times more expensive than peanuts. In addition, multihead weighing is especially efficient when the piece weight is larger, as is the case with for example cashews and macadamias.
The clear financial advantage of multihead weighing over the volumetric method is illustrated by the payback time of two years that was initially envisaged. In fact it looks as if the break-even point on the investment may come even more quickly.
As Helmut Brangenberg, Head of Felix’s technical department puts it: “The investment is paying off very quickly, as we are saving a lot of money by weighing the product more accurately and reducing giveaway.”
#Fast_Payback #Ishida_Nuts #Felix #German #nut #Schwerte #peanuts #cashews #Austria #Switzerland #Italy #Slovenia

Elvan in a Nutshell