A Turkish Exporters Assembly poll of 487 companies indicate that Russia is now No. 2 in desired markets by companies going into the export business. Russia was previously not even cited among the first five countries desired as a market.
During the landmark St. Petersburg summit between Turkish President Recep Tayyip Erdogan and his Russian counterpart, Vladimir Putin, on Aug. 9, the two leaders expressed desire to boost their volume of trade to $100 billion annually.
Summary⎙ Print The two countries have been after this target since 2013, but until now have only reached $38 billion.
But bearing in mind the highest level of trade volume between the two countries was $38 billion in 2008, achieving the new goal will not be easy.
Reviewing the past 20 years of trade volume, we see that in 1997 the volume was $4.230 billion. Until the end of 2002, the highest level reached was about $5 billion. In 2003, it was $6.8 billion; in 2004, $10.8 billion; in 2005, $15.2 billion; in 2006, $21 billion; and in 2007, $28.2 billion. The upward trend peaked at $37.847 billion in 2008.
Because of the global economic crisis, the volume regressed to $22.6 billion in 2009, and it hasn’t reached the 2008 level since. The trade volume was $26.2 billion in 2010, $29.9 billion in 2011 and $33.3 billion in 2012.
Numbers reveal that the downward trend in Russia-Turkey volume of trade began before the shooting down of the Russian fighter jet in November 2015. The volume declined to $32 billion in 2013 and to $31.2 in 2014. In 2015 — because of the economic crisis in Russia and excessive parity loss of the ruble — the volume of trade fell to $23.9 billion.
Following the November 2015 crisis between the two countries, trade hit bottom in 2016. In the first six months of the year it sunk to $8.5 billion. Worse for Turkey, of that $8.5 billion, $7.7 was our imports from Russia, mostly natural gas. Turkey’s exports to Russia in that period were a meager $737 million.
The first six months of 2016 were the worst in terms of export performance for Turkey on record since 2004. The most striking aspect of the trade with Russia is that from the outset it has been in Russia’s favor — that is, Russia sells us more than we sell to them. Of course our dependence on Russian natural gas is one main factor of this imbalance. If the volume never exceeds $100 billion, that could mean Turkey is selling more to Russia than before because our natural gas purchases are not likely to increase in the coming years.
Turkey’s list of main exports to Russia include fruits and vegetables, fish, chicken, nuts, automobiles, factory-made clothing, leather, fur, carpets, chemical products, machinery, textiles, iron, steel, jewelry, water heaters, soap, salt, spice, wires, cement, refrigerators, furniture and tobacco.
In return, Turkey buys from Russia natural gas, barley, wheat, rice, metal goods and oil products.
But how to hike up the volume of trade? From contacts between the two capitals, it is understood that there will be concerted efforts to boost cooperation in energy, contracting, defense industry and tourism.
Turkey’s anger with the West because of its apathetic attitude toward the failed coup suggests relations with Russia can develop faster and be more diversified. This was very important to establish at Russian-Turk Joint Investment Council for joint investments in third countries. Also in sight is the potential reconstruction of Syria.

Turkey’s Ministry of Economy says Turkish companies have about $10 billion of investments in Russia. On their part, Russians focus on tourism, and oil and gas production storage opportunities in Turkey. The Akkuyu nuclear power station is the biggest Russian investment, worth $25 billion.
Turkish contractors until now have contracted projects in Russia totaling $64 billion. Only in 2015, Turkish contractors were awarded contracts totaling $4.3 billion.
A Turkish Exporters Assembly poll of 487 companies indicate that Russia is now No. 2 in desired markets by companies going into the export business. Russia was previously not even cited among the first five countries desired as a market. 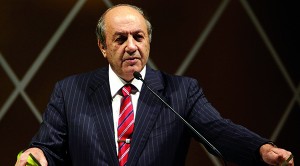 Tuncay Ozilhan, the chairman of the Turkey-Russia Business Council, is optimistic about the $100 billion goal. He said, “Very key decisions were made. There are new inter-ministerial committees. We can reach the $100 billion goal in 2019 or 2020. When mega projects get going, it won’t be a dream to reach that level.”
Referring to the importance of the formation of the Turkish-Russian Joint investment Fund, Ozilhan said, ‘‘Major projects in energy and the defense industry will be supported by that fund.”
The Turkish-Russian trade volume could enter an upward trend in the coming years. But we have to watch carefully whether Turkey’s increasingly booming ties with Russia in political, military and economic fields will have negative effects on our relations with the West. We can’t forget that Turkey’s biggest trade and investment partners are European countries.
#Turkey #Russia #trade #Turkish #Recep_Tayyip_Erdogan #Vladimir_Putin #Exporters #Turkish #market #natural_gas #barley #wheat #metal #rice #oil_products