by fdturkey
in News In General
3 min read

* The value and unique characteristics of olives and olive oil have been acknowledged for centuries and are gaining even more prominence today. Cultivation of this noble fruit is concentrated in specific regions of the world, primarily in the countries bordering the shores of the Mediterranean. Turkey is one of those fortunate countries.

Although it is still largely limited to the olive producing regions, olive oil consumption in Turkey is increasing as people become more health conscious. Previously standing at 1.5 kg, per capita consumption has now reached over 2 kg thanks to promotion showcasing the health benefits of olive oil. Consumers have also recently started to become more knowledgeable about the different olive varieties and the way in which olive oils can vary in taste according to their geographical origin. As a result, consumer demand for monovarietal olive oils is growing and there are more and more gourmet shops. These developments have had a positive impact on the image of olive oil, which is no longer perceived by consumers merely as a food staple but as a select product available in a wide range of variants: flavored, cold press, early or late harvest, unfiltered, etc. As the understanding of the health benefits of olive oil has increased, so has consumer demand for cosmetic applications of olive oil, for instance in soaps and hand creams. 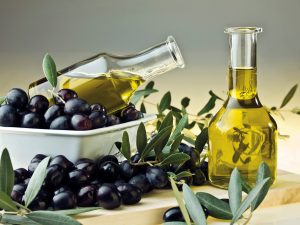 The olive has been a symbol of Mediterranean civilization throughout history and has been long established in Turkey. In fact, south-east Anatolia is known to be the cradle and gene center of the olive, a claim that is corroborated by subspecies of olive found in a line stretching from Hatay to Kahramanmaraş and Mardin. From Southeastern Anatolia, this noble tree spread to west Anatolia, then fanning out to Greece, Italy, and Spain via the Aegean Islands.

The olive tree is commonly acknowledged to be the very first tree of all. It is mentioned in all the major sacred sources and has been used since 6000 BC, ac- cording to archaeological and geological findings. The first method of olive oil production was to crush the olives underfoot and then extract the oil from the mash with hot water. The oldest olive oil facility, dating back to 600 BC, can be found at the ancient settlement of Klazomenai in west Anatolia, in the Urla district near the city of Izmir.

Olive oils for consumption can reach up to 3.3 percent acidity level – the lower the level, the higher the quality and healthier the product. Global acidity norms are set by the International Olive Oil Council. Following is a short guide to Turkish writings on packaging.

Early Harvest Olive Oil: Early harvest oils, with their bitter taste, low acidity, and higher antioxidant content are worth paying a little extra for. Before olives are fully ripen, they are often collected to make the first oil of the season, Early harvest oils of bitter, peppery flavor, tend to be more expensive since more olives are needed to make the same amount of oil as later in season. If you want to make sure your oil was made this year, choose ‘yeni hasat’ with the appropriate date.

Other Olive Oils: Virgin Olive Oil, Ordinary Virgin Olive Oil, Refined Olive Oil, Riviera Olive Oil. Naturel birinci zeytinyağı – virgin olive oil with acidity level between 0.8 and 2 percent. Naturel zeytinyağı is an equivalent of virgin olive oil with acidity not higher than 2 percent. Rafine zeytinyağı is refined olive oil of acidity level higher than 2 percent, also referred to as ‘pure.’ In the old times, this type of oil was used in oil lanterns. Despite its low acidity under 1 percent, riviera type is a mixture of virgin and refined oils, and its flavor differs significantly from natural virgin oils.

“Our expectations from Turkish Exporters are beyond the normal”

The industry for sweets and snacks is ready to take off again!