BENEO, one of the leading manufacturers of functional ingredients, has announced a 40% reduction in specific carbon emissions at its Oreye facility in Belgium. This achievement is a result of a 10-year program of energy saving, which closed with an €11 million investment into increased energy efficiency measures. The reductions at Oreye show the company’s continued commitment to prioritising sustainable practices in all of its facilities. This latest development marks an important step for BENEO as it aims for carbon neutrality by 2050.

As part of the recent investment, a new gas turbine and heat recovery boiler was installed at the Oreye facility. As well as providing for BENEO’s own electricity production needs, the new system also enables the company to export an additional five megawatts to the public electric grid network each year.

Project planning for the system began in 2017. As well as the installation of new equipment, significant civil works had to be undertaken, including the dismantling of old sections of the building and the erection of a new steel structure in the heart of the factory, to house the system. The gas turbine went into pilot operation in August 2019 and is now running at full capacity. 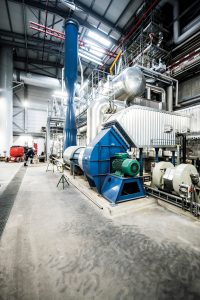 Philippe Dumont, Operations Managing Director at BENEO’s Oreye facility, comments: “Sustainable development is a cornerstone of our business strategy and BENEO is committed to achieving carbon neutrality by 2050. The production plant in Oreye continues to contribute to this target with a combination of solutions, including the increased use of renewable energy in future. The integration of the new gas turbine system into our existing steam and electricity production is an important part of the energy efficiency program that we began 10 years ago. Our aim was to cut specific carbon emissions on site and to date we have achieved a total reduction of 40%, thanks to significant fuel efficiencies and yield gains.”

BENEO has been producing prebiotic natural chicory root fibres at Oreye since 1992, by using a gentle hot water extraction method. The resulting dietary fibres inulin and oligofructose can be used in bakery, cereals, dairy, confectionery and baby food products. The plant has been supported by Oreye’s local agriculture for more than 130 years. Today 700 farmers in the region have a chicory contract with BENEO, and the Oreye facility currently employs 300 people.