ISM 2021: Positive signals in the run-up to the fair – around 80 percent of the space already booked

Industry also using ISM in the coming year as the most important industry platform – extensive measures for ISM in extraordinary times.

ISM 2021 is recording many positive signals in the run-up to the trade fair: Not only that around 80 percent of the space is already booked. Leading representatives from the trade and industry are also looking ahead to the trade fair optimistically and are ready for the re-start, among them for instance the Association of Medium-sized Companies – ZGV e.V., REWE Group, ESMA – European Sales & Marketing Association Ireland or the European Marketing Distribution Switzerland. Further statements can be read on ISM’s homepage at https://bit.ly/3iHiOAq

Especially against the backdrop of the ongoing pandemic, the detailed protection and hygiene concept for the conduction of trade fairs in Cologne is an important pillar for the success of ISM and ProSweets Cologne, which is being staged parallel. Together, both trade fairs are offering the entire industry a wide-ranging product and information platform also in the coming year and they have a safe alignment with regards to the Corona-compatible conduction of trade fairs thanks to the #B-SAFE4business concept developed by Koelnmesse.

This includes among other things continuous online ticketing with complete registration, significantly wider aisles, extensive hygiene measures and the obligation to wear a nose and mouth mask in all sections except when seated at the stands or in the food service area. The overall concept at a glance: https://bit.ly/30AB7B6 . 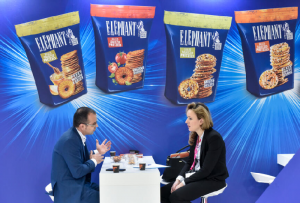 Furthermore, Koelnmesse has launched the project #B-SAFE4businessVillage. The aim of this village is to give the exhibitors of upcoming trade fairs an idea over the next few weeks of how trade fairs can be made possible also in the times of Corona under observance of hygiene and safety distance regulations. As of October, the prototype of a trade fair event with various stand construction concepts and event formats will be simulated in Hall 9 of the Cologne fair grounds on space spanning approx. 5,000 m². Diverse Koelnmesse sections and service providers will be presenting their new trade fair products there, which enable a Corona-compatible organisation, for example an app that controls the visitor flow or a camera-based people-counting system.

Oliver Frese, Executive Director and Chief Operating Officer of Koelnmesse: “We will act in line with the needs of the respective industry for each individual event. All of these measures support our customers in being able to plan and realise their trade fair appearance as efficiently as possible in spite of the current challenges. Even if we will probably still not be able to match the international dimensions of the previous events at the beginning of the New Year and even if the participation is significantly more focused: For example, there is going to be a strong European emphasis at ISM and ProSweets Cologne. But the trade fairs will take place in order to give the industry important impulses directly for the new fiscal year. In addition, in the form of the already announced, new, digital industry tool, Matchmaking365+, we will be taking an important step in the direction of the hybrid trade fairs of the future and are thus extending the digital reach of both trade fairs beyond the mere duration of the trade fair itself.”

From October 2020 onwards, “Matchmaking 365+” is for the first time providing the companies exhibiting at ISM with additional digital opportunities for establishing contacts and networking with customers. These also include product presentations, video content and other information in the digital “Exhibitor Showrooms”. Virtual meetings per video, chat or audio are also possible. Access to the digital trade fair platform is free of charge for registered exhibitors, trade visitors and media representatives.

Anuga 2023 under starter’s orders: Interested companies can profit from the early bird campaign up until 30 September 2022

Spirit of optimism ahead of IFFA 2022: New perspectives for the meat and protein industry

CEO of Koelnmesse: “We are looking forward to our trade fairs in Cologne!”