Turkish Poultry companies on the attack

Expanding its presence in export markets Turkish poultry companies compete professionally and deliver their products to 55 countries. KTG, Poultry Promotion Commission, recently met with big companies in Saudi Arabia and in Russia.
According to the information issued by KTG, several events have been held under the framework of sectorial trade visits organized between 7 to 10th September while visiting one of the largest poultry product buyers of Saudi Arabia who imports 3 billion dollars worth of broiler annually. KTG chairman Mujdat Sezer, board members, representatives of leading poultry producers in Turkey and Yunus Derimer, Turkish consul in Riyadh, attended the event. Banvit, Beypi, Beyza Erpilic, Has, Keskinoglu and Senpilic companies met with officials of Saudi Food and Drug Authority. Also a Business Forum was held. Turkish companies got their first orders of Al Munajem Cold Stores, largest imports in the KSA. Mujdat Sezer of KTG informed about recent developments in the market where the embargo on Russia has been turned out to be an opportunity for Turkish exporters to this market. Export volume to this country began to rise and talks between parties have been accelerated to solve problems about registration, licensing and other technical matters. KTG was a major participant in the World Food Moscow fair held in September in Russia. Turkey has competitive advantage in export markets by having new facilities equipped with latest technologies. Turkey rank on 7th place in broilers and 2nd rank in egg exports. It may increase its export volume up to 1.3 billion dollars immediately. KTG chairman emphasized on the importance of broilers and eggs in healthy diet for the nutrition of kids and people. They are both rich in pro – tein and very healthy. Egg contains the highest quality proteins after mother milk. 63,5 million eggs produced in the world. China ranks at top followed by the USA, Turkey is among the top ten countries in egg production and second place in egg exports. Turkey’s share in global market is 1.16 %. Per capita consumption of poultry prod – ucts is steel lower than in the Europe and the USA 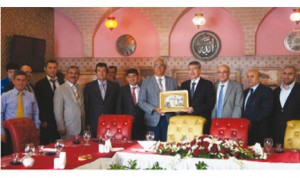 The French loved the fish imported from Turkey