The countdown to the 40th edition of HostMilano has now begun, the trade show that will be taking place at Fieramilano from Friday 20 to Tuesday 24 October and that will be celebrating with the leading event for the Ho.Re.Ca., food service, retail, mass-market and hôtellerie industries.

Growing numbers compared to the same period in 2015

HostMilano – International Hospitality Exhibition is already boasting sensational numbers, just before five months to go to the cutting of the ribbon, promising to further build on the success of the last edition: as of today, 1,824 companies have confirmed their attendance, including 1,092 Italian (59.9%) and 732 international firms (40.1%), representing an increase of 11.4% compared to the same period in 2015.

The progressively international nature of HostMilano, which will see 55 different countries being represented on the opening day, is substantiated by eight new entries – Belarus, Egypt, Lichtenstein, New Zealand, Serbia, South Africa, Sri Lanka and the Ukraine – which will be taking to the stage for the first time, while Canada will be back following the 2011 edition. Excluding Italy, Europe will boast the largest number of companies (73.5%), with Germany, Spain and France topping the list, followed closely by the USA, the United Kingdom, Switzerland, Greece, the Netherlands, Portugal and Austria.
As regards the product categories represented by the companies, the Foodservice Equipment and Bread Pizza Pasta macro-sector equates to 45.7% and is also the most heavily represented with 729 participants. The other two macro-sectors are as follows: Coffee Tea – Bar Coffee and Vending Machines – Gelato – Pastry (36.5%) and Furniture and Tableware (17.8%). 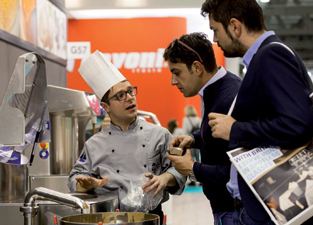 1,500 buyers from all over the world will be in attendance

Selected owing to the growing investment in profiling and the ever closer collaboration with the ITA (Italian Trade Agency), there will be over 1,500 hosted buyers arriving from Europe (10%), the Mediterranean and South Africa (7%), the Middle East (15%) Northern America (23%), Central and Southern America (8%) Russia (18%), Asia and Oceania (19%).

Hundreds of meetings and events in addition to business activities

The 40th edition of HostMilano – International Hospitality Exhibition has not however been designed solely for business opportunities in all the various Ho.Re.Ca sectors, but is also a place where training and learning opportunities abound. In addition to professional meetings, there will in fact also be an extensive number of events, including workshops, training opportunities, round tables and show-cooking demonstrations. The visitors will be able to freely attend the hundreds of events overseen by Host and will have the opportunity to get the lowdown on all of today’s ‘hot’ topics.
EXIHS will shine a spotlight on the age-old tradition of Italian hospitality, thanks to the return of the concept-space by architect Dante O. Benini, designed this year in partnership with Davide Rampello: a great cube that recounts the history of hospitality through the use of surfaces and material. Nearby, there will be a lounge area that will feature a background wall showcasing Italian agricultural and cooking staples.
As regards catering, the APCI (Association of Italian Professional Chefs), through the Obiettivo Apprendistato (Apprenticeship Objective) training project, will see the most talented newly-qualified young chefs attend the fair after having been selected following a lengthy process. For its part, the Identità Future space, organised in collaboration with Identità Golose, will see chefs take part in compelling show-cooking demonstrations where the latest frontiers in haute cuisine will be showcased.
There will also be a space dedicated to the world championship finals of the ‘Cake Designers World Championship’ and the ‘World Trophy of Pastry, Ice Cream and Chocolate’ in collaboration with FIPGC (International Federation Pastry Ice Cream Chocolate).
Moreover, Altoga (Lombard Association of Coffee Roasters and Importers and Food Wholesalers) will be joining forces with Fipe at Host 2017 for Caffè e…, the event dedicated in its entirety to the coffee industry. The same theme will be the focus on 21 and 22 October for the 5th Gran Premio della Caffetteria Italiana (Italian Coffeehouse Grand Prix), organised by AICAF (Italian Academy of Coffee Masters), and supported during the finals by Altoga, so as to promote made in Italy professionalism and products.
Last but not least, the schedule of training and entertainment events devised by Mixer with Planet One will be taking place:
HostMilano will provide an opportunity for them to reveal the magic of mixology through professional workshops and Food Shows intended to discover natural herbs and medicinal plants.

Agreements with international associations get the go ahead

As part of a strategy that has seen extensive promotion the world over so as to reach a wider audience, the event taking place next October has also been devised to focus on this edition’s target areas – the USA, Canada and the Middle East – for which various activities to attract visitors have been organised through agreements with respected international associations. 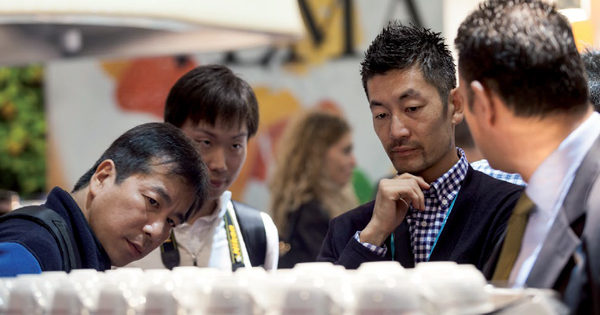 As regards the North American market, in particular, after having obtained prestigious certification from the Commercial Service of the US Department of Commerce, which authorises the official presence of the country at HostMilano, the fair has confirmed a number of partnerships with important associations such as ASID (American Society of Interior Designers), IDC (Interior Designers of Canada), ISHP (International Society of Hospitality Purchasers), NEWH (The Hospitality Industry Network), BAC (Baking Association of Canada) and the NYC Hospitality Alliance. These are the very latest companies that will be joining those with Feda ( Foodservice Equipment Distributors Association): Ocsa (Ontario Convenience Stores Association), WCSA (Western Convenience Stores Association) and Restaurants Canada.
This being said, when discussing agreements, HostMilano does not focus solely on North America but on all the most interesting of markets. Subsequently, the most recent agreement has been made with CEDA (Catering Equipment Distributors Association), which includes almost 100 distributors of products and services for the catering industry in the United Kingdom. Spain’s AFEHC (Asociación de Fabricantes Españoles Exportadores de Equipamientos para Hostelería y Colectividades) also operates in the same sector, while the collaboration with two organisations that have had an active and constructive role in the Milanese event for some time now is set to continue: FCSI (Foodservice Consultants Society International), which brings together professionals specialised in the provision of consulting services in the catering and hospitality industry all over the world. SCA (Speciality Coffee Association), which as of January 2017, merged with SCAA (Speciality Coffee Association of America) and SCAE, (Speciality Coffee Association of Europe).
#withover, #hostmilano2017, #companiesconfirmed

Anuga Frozen Food: This is where the international frozen food industry comes together