Turkey was the most leading foreign national pavilion with almost 300 exhibitors. The fair closes on an excellent record result: Around 165,000 trade visitors from 198 countries.
Export and innovations are the growth drivers of the worldwide food industry
The 34th Anuga was the best trade fair in a long time for many of the exhibitors. More than 7,400 companies from 107 countries, a new record, presented products from all over the world and all categories over the course of five days. Around 165,000 trade visitors from 198 countries took advantage of this unique offer for sourcing, information and ordering at top level. “Anuga is the world’s biggest and most important business platform for the international food industry,” Gerald Böse, President and Chief Executive Officer of Koelnmesse, commented towards the end of the event. “The trade fair brings the global supply and demand together very precisely. With its clear concept and focus on relevant themes, it is a reliable marketplace for the global food world for customers from Germany and abroad.” In addition to the high level of internationality, which characterized the picture of the trade fair on all days, the quality of the visitors was once again outstanding. For example, Executive Directors and top buyers from leading global trading companies were registered. The out-of-home market was also represented by international teams in Cologne as well as decision-makers from the major online trading companies. The trade fair was opened by the NRW Minister, Christina Schule Föcking. The honorary guest at the opening was the Indian Minister for the Food Processing Industries, I.E. Smt. Harsimrat Kaur Badal. India was the partner country of Anuga 2017. 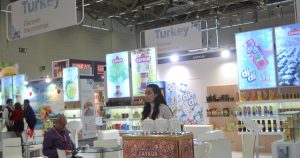 “Once again we have experienced a record-setting Anuga,” remarked Friedhelm Dornseifer, President of the German Association of the German Retail Grocery Trade (BVLH). “The high interest from the international food industry proves that the trade fair is a must-attend event in the diaries of the food manufacturers and buyers. Anyone, who wants to get a picture of how the world will eat and drink today and in the future, has come to the right place at Anuga every time. Besides the presentation of innovative products, the latest trends in trading with food were also the key focus of the trade fair. And these are digital. The customers will become more and more increasingly omnishoppers. They expect a networked buying experience, where the bricks-and-mortar trade, online media and the usage of mobile device all merge into one. But the digitalization is not going to lead to the end of the supermarket. The consumers will continue to visit the shops to buy foodstuffs using all of their senses. Each technological advance that supports the retail trade in providing its customers with the corresponding offers is very welcome.”
The Chairman, Dr. Wolfgang Ingold, summed it up for the Federation of German Food and Drink Industries (BVE): “Today, growth in the food industry is only possible through exports. Every third Euro is already now earned abroad. As the world’s largest and most important trade fair for food and beverages, Anuga is thus also the biggest and most important platform for the export business of the German food industry. The German food manufacturers were once again this year able to impressively demonstrate that they have plenty more to offer than enjoyment – they are namely also the leaders in terms of quality, safety and diversity! That is also the reason why our food industry is among the TOP 3 export nations with a turnover of Euro 56.7 billion in the export business. Innovations play a central role in retaining this leading position. We are more innovative than any other branch of industry: Every year over 40,000 new products are introduced onto the market in Germany alone. Hence, Anuga is also the global leading trade fair of innovations.” 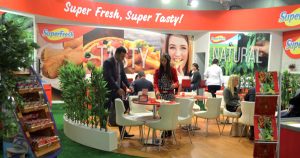 “Anuga demonstrated anew in the year 2017 its huge relevance, appeal and charisma for our entire industry,” emphasized Guido Zöllick, President of the German Association, DEHOGA. “Over the course of five fully-packed trade fair days, it was the unique source of inspiration for F&B trends, new products and forward-looking technologies for food professionals from all over the globe.”
They were all there: The registration data of Anuga shows that the entire trade was present in Cologne, both from Germany and abroad. They included Aeon, Ahold, AlbertHeijn, Aldi, Auchan, Carrefour, Coop, Costco, dm, Edeka, Globus, Hofer, Jumbo, Kroger, Metro, Migros, Müller, Norma, Rewe, Rossmann, Sainsbury, Sams Club, Schwarz Group, Sobeys, Spar, Target, Tesco and Walmart. Amazon and JD.com were present from the online trade. Furthermore, buyers from numerous specialised online platforms were also among the visitors of Anuga. Important importers and international wholesalers also travelled to Cologne to attend the trade fair.
Important buyer groups from the out-of-home market (food service, communal catering, system gastronomy companies) were also welcomed at Anuga, among others Autobahn Tank & Rast GmbH, CHEFS CULINAR, Gourmet International, Ikea, LSG (Supply Chain Sarl), Sysco (USA), SPCgroup (Korea), Transgourmet and YORMA’S AG.
Furthermore, it became evident again at Anuga that the trade fair is an indispensable sourcing platform: Many exhibitors were able to address their customers from the processing industry directly and conclude important contract transactions.
“This response shows that business is done in Cologne, what’s more across all channels, from the classic trade, to the various categories of the out-of-home market. And that at top and also international level,” stated Katharina C. Hamma, Chief Operating Officer of Koelnmesse. 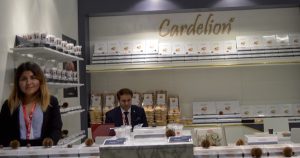 The share of foreign participants was high both among the exhibitors (90% foreign exhibitors) as well as among the visitors. The foreign share of visitors increased up to 75 percent (2015: 68 percent). “The growing number of buyers from abroad is clearly noticeable from the increased number of visitors,” explained Katharina C. Hamma. As usual the attendance from the EU countries and Switzerland was high. An increase in the number of visitors was particularly recorded from Italy, Spain, France and the Netherlands. More visitors also attended from the USA and Canada. The attendance from China, Japan and the partner country, India, was also very good. More visitors were counted from South Ameria too, especially from Brazil, Peru and Uruguay. There was also an increase in the number of visitors from the Near East and states of North Africa, i.e. from Iran, the United Arab Emirates, Morocco and Tunisia. More people visited Anuga from South Africa as well this year.
The export-oriented food industry was thus able to reach an international and first-class trade audience at Anuga. The innovations, which as always were a key focus of Anuga, contributed towards providing the industry with new impulses and ideas. These trend themes included food and beverages that are rich in protein, new products on the theme “superfoods” and numerous new ready-to-go/ready-to-eat ideas. Sustainable concepts as well as organic products were still high in demand, vegetarian and vegan themes were also a major focus. Alternative sources of protein like insects were a theme of intense discussion among the media.
Anuga in figures:
7,405 companies from 107 countries took part in Anuga 2017 on exhibition space covering 284,000 m². These included 716 exhibitors from Germany and 6,689 exhibitors from abroad. The share of foreign exhibitors was 90 percent. Around 165,000 trade visitors from 198 countries attended Anuga 2017; the foreign share was 75 percent.
The next Anuga will take place from 5 to 9 October 2019.
#guncel